The Greater Houston Region's "Unity Against Hate" rally was held at the Fort Bend County Justice Center on May 15.

May is Asian American and Pacific Islander (AAPI) Heritage Month. Asian American Pacific American Public Affairs (APAPA), a national bi-partisan non-profit organization for the AAPI community held a nationwide "Unity Against Hate" rally at 15+ venues around the USA to commemorate this historical moment and to stand up united against Asian hate. 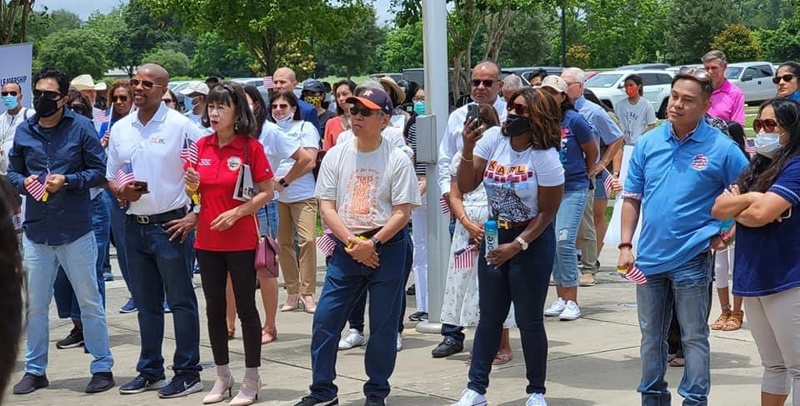 People from all walks of life, regardless of political affiliation, community, race, ethnicity, or gender came together to show solidarity. More than 80 community organizations came together to make the rally a success nationwide.

“It was a great display of solidarity with a strong message of unity against hate consistently relayed by speakers at the state, county, city, and grassroots levels.”

“The nation should live its creed. The surge of Asian hate must end. Let us remain true to the creed, let us stop hate,” said Middleton.

“All this hate has to stop,” said Sheriff Fagan. “As your Sheriff, I am committed to stop this hate. With God on our side, we will succeed.”

Several community leaders including the NAACP stood shoulder to shoulder with AAPI leaders in solidarity.

“Our work doesn’t end with this rally. It only begins” APAPA Houston President Qaisar “Q” Imam told the rally attendees. He pointed out the collaboration between NAACP and APAPA as one of the most important developments moving forward. The rally provided one of those rare moments when politics was put aside for the good of the greater society and firm commitments were made to stand united against hate.

Read about "Together, We are united" rally here.
1